By Albrecht Hofheinz, University of Oslo

There’s been elections in the Sudan last week. Did anyone notice? Not really. Presidential incumbent Omar al-Bashir won comfortably with an official 94.5% of the votes; his ruling National Congress Party will continue comfortably to dominate national and state assemblies. No-one really bothered to figure out who the three handful of names were who posed as alternative candidates to The President. There was no real alternative. Not to The President; not to the NCP (the symbol of which is a tree; satirised on Facebook by cartoonist Khalid Albaih)

This is why much of the opposition called for boycotting the elections. Did anyone notice? Not really. Here’s a picture The Guardian published on the first day of the elections of an opposition “sit-in at the headquarters of Umma, one of Sudan’s biggest opposition parties”: 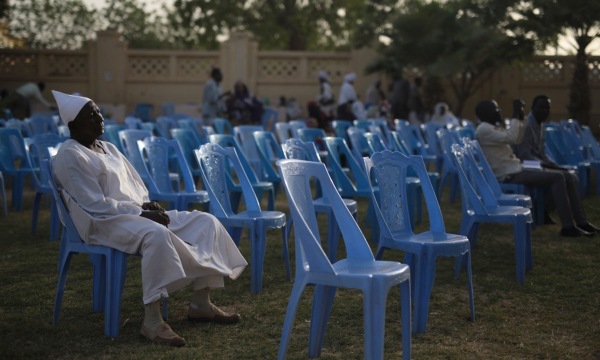 In well-known Sisi-style, the elections were extended by one day when authorities realised that turnout over the first three days had been embarrassingly low. Reports on voter participation ranged from 10% (according to the opposition) to 46.4% (the National Elections Commission‘s final figure, which it upped from the 42% it had given the day after voting had ended). Long-time Sudan observer Alex de Waal pointed out that the official total number of voters was less than the ruling party’s 2010 membership…

Bashir and his NCP may not have scored big with regard to international legitimacy, but their rule remains without serious challenge both internationally and in the country itself where even the disillusioned youth admit: what is the alternative? The old sectarian parties who had run the country into the ground before 1989; al-Ṣādiq al-Mahdī, already at that time known to be big-mouthed (Abū Kalām) but short on really constructive action? No thank you. The armed opposition, splintered, infighting, often indistinguishable from banditry? No thank you. The handful of idealist young activists left after the bloody crackdown on student protests in 2013? With over 200 dead, where is the rest? Those who still can be found voluntarily admit that in the absence of broader political support, they cannot continue to operate effectively, and that they don’t want to die as martyrs for a hopeless cause. What Bashir & Co. sell at home and abroad is readily bought both at home and abroad: It’s either us or ISIS.

So politically, the mood in Khartoum is subdued. Lacklustre. What kind of regime do Bashir & Co. represent, a quarter century after taking power under the banner of an Islamic “civilizing mission” (mashrūʿ ḥaḍārī), and a few years after ‘loosing’ (in the eyes of a sizable section of Northerners) the South so that they could, according to their own words, rule the country according to Islamic principles without having to bother about a non-Muslim minority? Well, Bashir & Co.’s most ardent Islamic supporters have long left the regime’s camp, or been expelled from it, whether or not they are followers of maverick Ḥasan al-Turābī who has been migrating in and out of the presidential circle for much longer than the current regime has existed. (Some of the otherwise die-hard Sudanese Islamists, btw, have recently begun to die as martyrs on foreign fronts ranging from Mali to Syria). With the ideological Islamists gone, the only unqualified praise for the current government to be heard in Khartoum now comes from the business elite. “Investment opportunities in this country have never been as good as now,” they state. Import-export, huge agricultural schemes, and gold mining are perhaps the prime money machines for those who can afford to buy into them. Since not too many of this breed can be found within the country, the government is busily courting business abroad: gold is the new oil. Banks to cash in and transfer the profits have sprouted like mushrooms on every street corner in Khartoum. Along with a surprising number of upscale restaurants, a handful of high-rise towers, super- and hypermarkets selling Turkish delight, Black Forest Honey and Norwegian salmon at prices from which some expats shrink, and quite a few fancy villas (some bearing small signs saying something like “Multi Activities Co. Ltd.”), these are the most conspicuous signs of the new Sudan to which this visitor recently returned after a prolonged absence.

A new Sudan quite different from the New Sudan envisaged by a principled opposition in the old days, an opposition not only consisting of armed men like John Garang. The new Sudan of the current regime is clearly pursuing a different path. A path made clear by the Chairman of the Economic Subcommittee of the outgoing parliament, who in February 2015 came up with this advice to his fellow (?) countrymen: ‘If you can’t afford to buy a jallābiyya, buy an ʿarrāgī (a lighter and shorter garment) instead! If you can’t afford to buy a kilo of meat everyday, well then eat less!’  They guy clearly has read his Marie Antoinette. And for the benefit of those dim-witted who would find it hard to understand such advice, he clarified: “It is not the job of the state to make the people of this country  rich!” The penny has dropped; every Sudanese to whom I read this completed: “… for it is the job of those running the state to enrich themselves.”

Outside Khartoum’s most fancy new hypermarket, I was stopped by a middle-aged man wearing, yes, an ʿarrāqī. He was begging for money. Not just small change from the hypermarket; he wanted the equivalent of about 20 US dollars. To explain, he told the heart-breaking story of how his young boy had been bitten by a cat with rabies, and how they had taken him to the doctor, and how the doctor had written a prescription for an injection, which was all too expensive, and that he had spent the whole day trying to find this money, and that his boy was going to die… To prove, he held up the stamped prescription. “Don’t you have family who can help?” I asked. “No,” he said, “my family here are just as destitute as I am.” This is clearly new compared to the old Sudan where, in the words of the singer ʿUthmān al-Yamanī, people would “share the last bit of bread with you even if they go hungry afterwards.” The man got his money, and my friends assured me this was most probably not a made-up story, for people generally were too proud to make up such stories.

In fact, this was only a tiny example of a much more worrisome trend where more and more people cannot afford necessary health services. So the young idealistic Facebook generation has come up with a brilliant idea: use the power of social media to help people who cannot afford to pay for  medicine, a surgery, schoolbooks, or other such basics that the state doesn’t provide (remember, the state is focusing on other, more basic tasks). Among a number of social media initiatives that have sprung up over the past few years are Facebook and WhatsApp groups soliciting donations for concrete cases afflicted by kidney failure, retinal detachment, or a road accident. Each post tells a really heart-breaking but real story, and gives contact details and concrete sums as necessary for each case. The best-known of these initiatives is Shāriʿ al-Ḥawādith (“Accident Road”), originally founded to help children with cancer, and which has expanded to include children in need of medical assistance in general; and also has expanded beyond the original Khartoum group to comprise groups in all major Sudanese towns (they are currently debating a name change to the more comprehensive Īdēnā le-ahalnā, “Our hands for our folks”). The capital’s Facebook group holds “office” on the sidewalks of a major thoroughfare near Khartoum Teaching Hospital, and the volunteers are proud to report that their initiative is a big success, that people are really donating, and that donations have enabled them not only to help individuals in need but also to equip a complete new intensive care room for children in Omdurman Teaching Hospital, the country’s largest public hospital. Public hospital, mark you. Public-private partnership advocates, rejoice! For such laudable citizen initiatives really help the state to focus on its basic mission…

The young Sudanese who donate their ideas, their time, their engagement to such voluntary initiatives may be idealistic, but they are not naive. They know that they are providing band-aid to soothe wounds left open by a retreating public sector. With every bandage they apply they remind the recipient that this is not supposed to be charity, but a fundamental right of every citizen. More they cannot say. For no civil association in the Sudan is allowed to talk politics; failing to comply will lead to immediate closure. Privately, however, the young volunteers do raise critical questions concerning their role. Aren’t we, with all our good work, just plugging the gaps left by the government? Aren’t we merely helping to calm the patient? Aren’t we stabilizing the system by doing so?

It’s all nothing new, really. One of these young Sudanese recently posted a link to Arundhati Roy’s 2004 talk on the “NGO-ization of resistance” where she unmasked the NGO-boom as a fig-leaf to cover the retreat of the state in the neoliberal age, and to replace real resistance with feel-good activities.

The video has been watched a whopping 1300 times.

iThere are no comments

Begin typing your search above and press return to search. Press Esc to cancel.